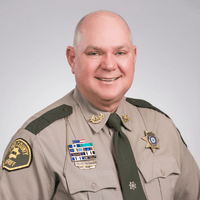 Sheriff Brian Gardner began his career with the Linn County Sheriff’s Office in 1980 as a communications operator. He became a reserve deputy sheriff in 1981 and began working as a full-time deputy sheriff in 1982. As a deputy sheriff, he worked in the Jail, Civil and Patrol Divisions and served as the Accreditation Manager in the General Services Division. He was promoted to Sergeant in 1994 and worked in the Community Services Unit of the General Services Division and in the Jail Division. In 1997, he was promoted to Lieutenant and became the Jail’s first Assistant Jail Administrator. He was promoted to Captain in 2000.  In 2002, he was reassigned to the Patrol Division as the division commander. In 2008, he was appointed Second Deputy with the rank of Major, overseeing the Patrol and Communications Divisions. He was elected Sheriff in 2008, assuming the position on January 1, 2009. He was reelected Sheriff in 2012, 2016 and 2020, and is currently serving his fourth term in office.